One of my favorite online magazines/hair community Afro Glitz is hosting its First Annual Web Awards.

Afro Glitz felt that it was necessary to honor those who advocate the beauty of natural hair and self-love, by creating the Afro Glitz Web Awards. You can nominate your site and/or your favorite sites within several categories.

Sponsors are welcome as well.

So, head over to Afro Glitz to nominate your favorites.


Peace and Blessings...
Posted by Laquita at 3:44 PM No comments:

I took down both my and my step-daughter's twists. I actually co-washed mine in preparation for a twist-out. I took hers out because, although they did last for about two weeks she was driving me crazy with all of her scratching saying it was itching - so I wanted to wash and re-do hers.


After unraveling her twists, she said she wanted to wear them out in a twist-out. It actually looked pretty good after I picked out tons of lint, but I knew it wouldn't last a week without getting matted and filled with lint again (I don't how she manages to pick up so much lint) and she was still scratching. I did let her wear it 'out' for a day though ;o)


Side of her 'one day' twist-out 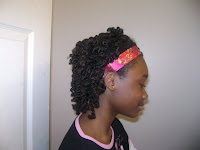 Since it was two-strand twisted all over it hung in her face, so I pulled it back and added a headband (I had the headband pulled back, further but for some reason she felt it looked better right at her hairline :o) Her hair was so nice and shiny and bouncy - she didn't have any dry scalp so I don't know why she was scratching all the time?? :o( 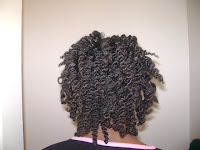 Back of her twist-out.


I decided to detangle each twist by hand - to get ready to re-wash. 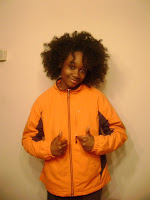 Detangled twist-out. I though this was a cute style, so we did another photo shoot before I washed it. 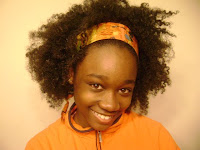 Closer shot with another one of my headbands.


The finished result.... I decided to put cornrows in the front with the ends in two-strand twists, then two-strand twists in the back. This way she could wear a twist-out the next week and it would still look pretty tame with all of her running around and stuff and she wouldn't need to use of any of my headbands - lol :o) 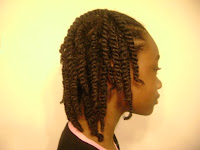 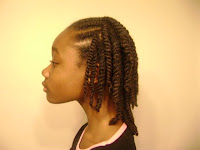 Damp twists - you can see a little of the leave-in conditioner/pomade mix (the white spots). 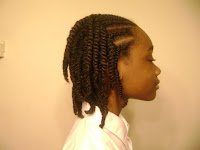 This was taken the next day - not much more shrinkage from the night before. 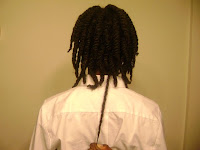 Showing the amount of overall shrinkage.

I co-washed my twists then let them air dry... I got carried away massaging the top - which resulted in lots of fuzziness. 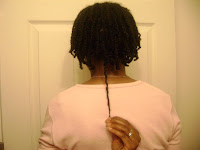 Showing shrinkage - some of the ones in the back and the very top/front unraveled so I re-twisted.
The next morning - I added some more oil and unraveled. I actually left in the row in the back. 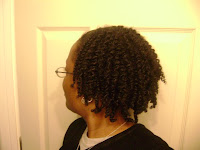 The night before I unraveled, while they were still damp I added some oil then covered with a satin scarf, which helped with the frizziness. 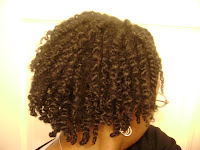 I plan to wear it like this for a week or two.
Also I haven't forgotten about my 'giveaway announcement' and will be back with updates soon. So stay tuned.
Peace and Blessings