Listen in to Live Interview with Marcia Hamilton 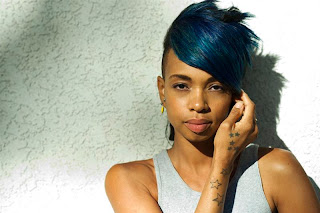 Marcia Hamilton - is the creative stylist behind the styles featured in Willow Smith's 'Whip My Hair' Video. The interview will be aired on livestream at 8 PM PST/ 11 PM EST.

Aside working with the Smith family, Marcia Hamilton has also styled John Legend, as well as Serena and Venus Williams and her work has been featured in InStyle, Essence and ESPN Magazine as well.

She will be interviewed by Regina Kimbell - the creator of the documentary "My Nappy Roots". Check out the links below for more information.

Natural Nina is having a 'Follow Me' Giveaway and the winner will receive a full-size Bobeam Rootz Shampoo Bar and Hair Tea :o)
The rules are simple:
First, you must be following both All Naptural or Natural Nina via Google Friend Connect or one of the social network sites listed below.

Next, leave a brief message in the comments section on Natural Nina's post announcing the giveaway, stating which of the social networks you are following us on.
* Twitter followers please include your twitter name in your reply.*
List of social network sites for All Naptural/Laquita and Natural Nina:
Twitter - @Laquita33 and @NaturalNina
Facebook - Natural Nina and Laquita/All Naptural
NetworkedBlogs - Natural Nina and All Naptural
The winner will be picked on Tuesday, October 26, 2010 , and will be notified by email! For more information on The Rootz Herbal Hair Grower Shampoo Bar and Hair Teas check out my Bobeam Natural Hair Products Etsy Shop and check out Natural Nina's Review.

This is a little late, but the following is a short story I wrote some time ago for breast cancer month. Note: This has nothing to do with natural hair - but I wanted to share and to remind everyone to click on the link under Breast Cancer Awareness to provide free mammograms.

I will be back with more hair updates soon ;o)

May looked up at the clock which read 6:30. She let out a deep breath and continued setting the table. Jerrod, her husband would be home soon. She couldn't believe she had actually finished all of the dinner preparations in time and she was tired - physically and mentally exhausted.

After turning down the oven and putting the pots on simmer, she went into the bedroom to freshen up. Sitting at her vanity and examining the image that looked back at her - it seemed as though she was looking at a stranger and not at her own reflection.

"I am not going to cry again," May said aloud. As she dabbed on a little eye cream and gloss, she began to reflect on her day. Dr. Jones called her ten minutes after she had left work and asked if she could stop by the office. She remembered how excited she was as she made the U-turn and headed in that direction. May and Jerrod had been trying to have a child for almost a year and she was anxiously waiting to hear the confirmation from Dr. Jones.

Before stepping in the building she quickly dialed Jerrod's office to let him know that Dr. Jones had finally returned their call and that she was on the way in to hear the news. Apparently, he was in a meeting so she decided not to leave a message.

She figured that she would surprise him with the news, along with a big celebration dinner when he arrived from work. A single tear dropped from May's eye. "Nope, not again," she said as she quickly wiped it away and attempted a half-hearted smile.

Moments later she heard the garage door opening. Jerrod was home. It was time to announce the 'big news'. . .

Jerrod was about to open the door to the refrigerator to put the cream away when the date on the calendar caught his eye. It was one year ago that May had announced the 'big news' that had changed their lives forever. Not only were they going to have a baby, but the 'just-to-be-sure' biopsy result was positive - May had breast cancer.

The tugging on Jerrod's leg woke him from his reminiscing. "Ut oh!" came the sound from his 10-month-old baby girl. He looked down at the tiny replica of May and noticed that she was pointing to a small puddle of cream that he must have spilled as he was staring at the calendar.

"We better get this cleaned up," he said as he put the cream in the refrigerator and scooped Maya off the floor.

After cleaning up the mess he had made, he carried Maya into the living room and sat down. He asked, "Maya, how would you like to hear a story?" Maya hearing the word 'story' climbed down off the sofa and pulled a book from the stack on the living room table. As she handed the book to her father, he smiled and said, "No, this story is not in any one of your books, but it does have a happy ending. It's about a brave king and queen, and their little princess miracle. It's a story of survival."

Just then he heard the garage door opening - May was home.
National Breast Cancer Awareness Month
The Breast Cancer Site
Stand Up 2 Caner
Posted by Laquita at 1:22 PM 2 comments: